As humans, we are so blind. I recently heard a person say that if God was real, he didn’t want anything to do with Him because he didn’t know how a good God could create a world like this one. This is a common argument amongst people who reject the existence of a God. People blindly look at the brokenness of this world and say it is evidence that there is no God. If God were good, He wouldn’t have created a world like this.

I say just the opposite. If you know the whole story, the brokenness is actually proof that God is very good. 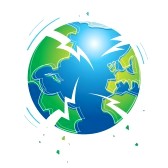 Don’t you yearn for it? For goodness? Don’t you wish there was no sickness, no hatred, no war, no selfishness? There is proof that all of humanity yearns for this. We see it in the themes of our movies. We see it reflect in our television programs. A good movie typically has a good ending. There are certain formulas that Hollywood producers follow to make the movie more popular and successful. Why is that? Because we all know somehow the way it is supposed to be.

The world we live in is not in the state He originally created it to be in. This broken thing wasn’t the perfect design. The perfect design is said (In Genesis) to be “good.” Life as it is now could have been very different. We were supposed to grow as a race in relationship with our Maker, discovering science and all the arts WITH Him. He created everything with mysteries that I believe can only be found out when revealed by the relationship of Father teaching the child. I personally think He designed this creation with thoughts of how exciting it will be to reveal to mankind how marvelous the creation actually is. I think He was excited to show us how the mysteries worked. But He never got a chance.

Genesis tells us that before the fall of mankind, everything was “good.” Adam and Eve were enticed by the serpent to gain wisdom on their own, without the relationship with God. They chose the tree of “good and evil” wisdom. Evil just means without God… They chose to gain knowledge without the relationship, without God’s revelation, without His insight. They chose blindness. And with that, I believe, by being kicked out of the “garden”, something happened to all of creation. Romans 8:22-23 states that someday ”the creation itself also will be set free from its slavery to corruption into the freedom of the glory of the children of God. For we know that the whole creation groans and suffers the pains of childbirth together until now. And not only this, but also we ourselves, having the first fruits of the Spirit, even we ourselves groan within ourselves, waiting eagerly for our adoption as sons, the redemption of our body.” So all of creation, including the state of our bodies, was affected by the actions of Adam and Eve. 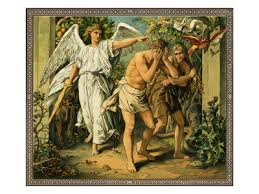 Now this is all speculation, but play along for a paragraph or two…

Could all of creation, including mankind, have lost access to another dimension? That choice to get wisdom without God we know separated us from God. What if He physically was more connected with creation and our bodies? What if we were spiritually and physically in some way clothed in that “dimension?” After being ‘kicked out’ of this dimension, Adam and Eve look at themselves and the glory and presence of God that once clothed them and see that it is gone. They suddenly needed to cover their bodies in shame that the presence and covering of God was gone.

I propose that the reason people generally want to cover up their bodies is to hide the shame that the glory of God no longer clothes us. Just as we know inherently how movies should end because we know how things are supposed to be,  we recognize that something is missing from our bodies (the glory of God) and so all of mankind covers himself. He doesn’t know why, he just feels better clothed.

Something happened to all of creation that makes it groan, waiting for redemption. We may not know what perfection looks like, but we long for it because we were created for it. Something is broken and we long for it to be repaired.The earth is broken. Sickness, hatred, strife…all symptoms of a broken world. It’s broken because of us, not because of God. If Adam and Eve had chosen the relationship with God and shown trust – instead of choosing to learn and get wisdom on our own without Him, we may have never had to walk through this brokenness. 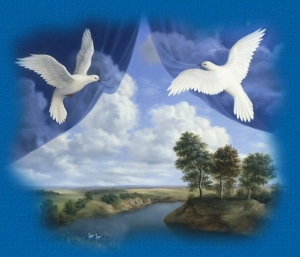 So in leaving the garden (which represents relationship with God through symbols of a walk in the garden with Him),something happened to us physically. We lost our covering. We lost (I believe) the glory of God that covered us. We lost the ability to walk and talk with God physically. We lost the ability to see Him with our eyes. This explains why we are so “blind” spiritually, why we “see only a reflection as in a mirror,” and why it is that now we only “see in part.” (1 Cor. 13:12)

The good news is that God has a plan to restore the human race to it’s former glory, but we are still in process. On the timeline of eternity, we’re somewhere in the middle. The finished plan has not yet all unrolled. In fact, “Christ has been raised from the dead, the first fruits of those who have fallen asleep.”(1 Corinthians 15:20) Christ’s risen body is an example of what our bodies will be like. (1 John 3:2-3)Because this post is getting long, I’ll write another day on what scripture says our bodies will be like (it’s exciting – kinda like superman! We get physical bodies that can yet walk through walls – a hint at what Adam and Eve’s bodies were like before the glory of God left them)…

But the point of today’s post is to point out that all of humanity recognizes (whether Christian or not) that the world is broken. We all inherently know how things ‘should’ be. We recognize the horror of sickness, death, selfishness and strife and long for those things to be gone. We desire the goodness of a God who won’t allow these things, and there is the rub. Without understanding that we are living in a plane where God is physically absent, we think that evil points to the idea of no God. When we know the true story, we can see that the presence of evil points to the absence of God, showing that God is purely good and that we so desperately need Him and should be able to trust Him in His goodness.

Those who don’t want to believe in God because of the state of brokenness we live in don’t know the whole story. Their accusations reveal this truth. They think this world is “it”. They think there can be no God because a good God wouldn’t create evil. But follow the logic to it’s conclusion and you’ll see that if God is truly good, in His absence all that is left is brokenness and evil. And that is where we are currently. We live in a world where God is physically absent. Either God removed Himself or we were “kicked out” of the dimension He was in, but physically we cannot see Him.

We may still be walking blind, but in our blindness we don’t have to stumble and fall. You can learn to hear His voice (John 10:27-28) and walk through life avoiding pitfalls. When we listen to His voice, He leads us beside still waters (Psalm 23:2). He helps us avoid the pitfalls in life. Hearing the voice of God enables you to walk through this life so as to win the race (1 Cor 9:24-25).

ONE PARAGRAPH RECAP: In the absence of God, evil and broken things exist. God is so very good and when He withdraws, evil is the natural by-product. He withdrew from the physical realm (or we were lowered in dimension out of His realm). We were removed from where He was (the garden). The Glory that clothed us was no longer there. The state we are in is a broken one because of the choices of the human race, not because God didn’t design it to be perfect. We rejected the perfect design and now must walk out life in brokenness. The good news is that He is so good and He loves us so much that he has a plan to redeem us all at the end of the timeline. He’ll redeem creation and He’ll redeem our bodies, but we’re not in that place on the timeline quite yet. We must initiate the relationship with Him. We must override the decision of the general human race and decide to trust Him for ourselves. When we do that, He comes into our lives and promises to lead us and guide us in His goodness. Though physically we are still blind, His voice in our lives will guide and lead us to win the race and acquire the prize. Our job is to reject the human race’s decision to walk through life without Him and to come to Him and accept Him as the Father He always has been.

I mourn for those who have been lied to and who don’t know the truth. I hate that we live in a broken world and that we live blindly. I can’t wait for the day when perfection comes. I hate doctrines that disable people and lie about your character. I’ll fight for you to the end of my days to help pull down the lies that kill, steal and destroy. I want to shout from the mountaintops to people that You are good! I want to tell people that yes You are sovereign, but that you are also good! You desire to lead us beside still waters and you work all things together for our good. Help me to show others how good You are Lord!

To get a copy of Wendy Selvig’s book, Snatchproof, The Art of Hearing God’s Voice, CLICK HERE.

One thought on “Why A Broken World Proves God Is Amazingly Good.”